It's the home for the rest of your life. 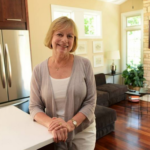 Boaters, water skiers, fishermen and others who simply enjoy the lakefront lifestyle are finding a slice of the Atlantic coast tucked away in unincorporated Antioch. Newport Cove, a 67-lot community located on Bluff Lake in the Chain ‘O Lakes, is staying true to the spirit of its name with a colorful coastal style architecture reminiscent of Newport, Rhode Island, or the Outer Banks of North Carolina and a 105-slip private marina.

Newport Cove is the brainchild and passion of Susanne Tauke, president of New American Homes, Inc., based in Antioch. About a decade ago Tauke purchased an old marina, a camper/trailer park, two bar/restaurants and some adjacent vacant land, assembling 42 lakefront acres. Over the intervening years she has transformed the area into a premiere planned unit development housing community which is attracting transplants from Chicago, Bolingbrook, Lake Forest, Darien, Barrington and Palatine, to name a few.

“Newport Cove is divided into three neighborhoods,” Tauke explained. “We have 21 waterfront lots where we are building custom homes starting in the $600,000s; 15 off-water lots which we are calling ‘The Estates’ and these custom homes start in the low $400,000s; and 31 lots in ‘The Cottages’ where we are building four different floor plans, three of which are ranches and the fourth is a 1½-story plan. They range in size from 1,465 to 2,300 square feet and in price from $274,000 to the mid $300,000s. Landscaping and snow removal is provided for these homes.”

Residents of Newport Cove have the right to lease or purchase boat slips at the marina which allows them to access the entire Chain ‘O Lakes with its plethora of water-related recreational opportunities. They also may enjoy an 8-acre waterfront park complete with outdoor cooking facilities, a gazebo, Frisbee golf, softball facilities and more. Green belts of community open space also meander throughout the community, making every individual lot feel larger than it actually is, Tauke said. There is even a community garden.

“Ours is a very green, natural community and while we have flood plain, none of the homes are located in it. That is reserved for community open space and features lots of native grasses,” she explained.

“We have people living here who range from toddlers to 87, but the most common age seems to be young empty-nesters who move here because they want their adult children to visit and that strategy seems to be working for them because I see lots of the adult children here boating, tubing, water skiing and fishing every weekend,” Tauke revealed.

About 40 lots remain, with a selection in each of the neighborhoods, she said.

“I think the thing that sets New American Homes apart from the competition is the fact that even with our standard plan homes, we are willing to make custom changes like moving a wall or re-purposing a room. And our standard quality is high. For instance, all of our doors are 8 feet high; we use lots of maintenance-free products on our exteriors; and I incorporate universal design in all my homes with wider doorways and hallways to accommodate everyone,” Tauke explained.

“My sister is an architect and a professor at the State University of New York (SUNY) in Buffalo and her specialty is universal design. During the recession, she and I took one of our standard plans and reworked it using universal design. In 2012 that design won the National Home Builders Association’s ‘Best of Fifty Plus Home Designs’ award,” she said.

“I don’t want to build commodity housing. The truth is that I am willing to sacrifice profit for aesthetics because I want to be able to drive through my communities in 20 years and have them still look really good,” she stated.

Tauke began her professional life as a journalist, transferring her efforts to Chicago area homebuilding (the avocation of her Iowa parents) in the early 1980s. She incorporated New American Homes Inc. in the early 1990s.

“I like lots of variety in my work and don’t want to be stuck behind a desk every day. I like the fact that, as a builder, I am concentrating on design one day, marketing the next and financing on another day. No two days are the same and I also like the creativity involved in home building,” she explained.

Tauke said that she attributes her survival of the recession to a great piece of property, a great investor and a great bank.

“It also helps that I have been working seven days a week since 2008,” she continued. “But it was absolutely heartbreaking when I had to let two-thirds of my staff go and had to watch many of my longtime subcontractors go out of business. I don’t think that many people realize what a tragedy that recession was for our business. I am very active in the Home Builders Association of Greater Chicago. Before the recession we had over 2,500 members. Now our membership is down to just under 200.”

“In addition, the average age of a construction worker today is over 50 and that just wasn’t true back in 2006 and 2007. Only the guys who were running the crews and had the most seniority stayed in the business and most of them are back to actively practicing their trade instead of supervising others,” Tauke added.

She has also been unable to ignore the huge change which has taken place in financing since the recession. Tauke said that the average buyer is much more cautious, for obvious reasons, so it is taking much longer to put together sales. Buyers won’t start building a house until their current home sells, for instance, and usually have to arrange for temporary housing while their new home is built.

In addition, so many people’s credit was harmed by foreclosures, short sales, late mortgage payments and even bankruptcies and they have to wait seven years before they are once again eligible for a mortgage. Many of those people are still renting and, consequently, are out of the housing market.

Even those who are buying have changed their requirements. They are taking less square footage and fewer extravagant amenities, but they are insisting on higher quality construction and finishes and more open floor plans in exchange for those sacrifices.

Once Tauke completes Newport Cove, she said she would like to concentrate on smaller infill projects and is willing to look in the city of Chicago, the closer-in suburbs and the Chain ‘O Lakes area that she has come to know so well.